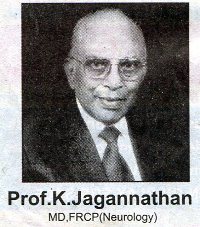 Born on 11th April 1928 at Sivakasi, Tamil Nadu as second son of Dr. S. Kanthimathynathan & Smt. Rathnammal. Had early education at Madurai and graduated from Stanley Medical College, Madras in 1951 and M.D. Degree in 1958 from the University of Madras as a Colombo Plan Scholar specialised in United Kingdom in Neurology, working in the Institute of Neurology, Queen Square, Maidavale Hospital and Maudsley Hospital in London. Started Medical Neurology in Madras in 1962 and rose to become Professor of Neurology and Director of Institute of Neurology of the Madras Medical College until retirement in 1986,appointed as Professor Emiretus in Neurology in Madras Medical College and currently working as Director of Institute of Neurosciences at Apollo Hospitals, Madras. Has outstanding contributions in various fields in Neurology like Epilepsy, Stroke and Behaviour Neurology. To mention a few.. Described a new form of Neuro-Degenerative Disorder affecting the motor neurone which was widely aclaimed. Life Member of many Neurological Societiesand a past President of the Neurological Society of India, a Founder fellow of the Indian Academy of Neurology. Had been a delegates to World Congresses in Neurology, Chairman of the Scientific Programme Committee of the World Congress of Neurology in 1989 and Vice-President of IV-WCN TRUST (India). Has numerous publications in national and international journals and edited more than a dozen books in the speciality. Interested in sports was a University hockey playerduring his student days representing University of Madras and had been sports officer until retirement in Madras Medical College. Interested in Music (both classical and light) and Photography. One son a doctor working in United Kingdom and has one grandson.